Murder on the Case-Dvoor Farmstead — Part 2

A Murder on the Farm

Oct. 7, 1803 doesn’t appear particularly noteworthy if one peruses Philip Case’s day book entry for that date. But that Friday was anything but typical at Case’s tannery when a disagreement between two slaves on the property had deadly consequences.

Slavery was an ugly part of the history of Case’s tannery. The Case family hired local labor and purchased slaves to work; records indicate that Case was taxed for one adult male slave in 1786, 1789, 1802 and 1803, and he likely owned several other African Americans.

New Jersey has a rather muddled history when it comes to slavery. NJ was the last northern state to abolish slavery; it took until February 1804 for it to enact a gradual abolition. Its act declared a “freedom of the womb,” by granting emancipation to any child born to a slave after July 4, 1804, but required these children to serve their mother’s owner until age 25 if male and 21 if female, as James Gigantino noted in his book The Ragged Road to Abolition: Slavery and Freedom in New Jersey 1775-1865.

This meant that there were still slaves in New Jersey on the eve of the Civil War. Gigantino offers one example: “In 1789, Catherine was born a slave in Hunterdon county, New Jersey. Like thousands of other slaves in the state, she worked daily for her master, John Hagaman, on his hundred-acre farm in Amwell. . . In 1840, Catherine moved with her master to neighboring Raritan. Although the 1850 Census recorded her as a free woman, on February 16, 1856, Hagaman sold sixty-seven-year-old Catherine as a “slave for life” for twenty dollars to Charles Sutphin of Somerville.”

At the tannery on October 7, 1803 a slave named, James, was asked to help Mr. Pettit “draw out dung.”* A second slave, Brown, who had just started working in the tannery was told to help but complained of a pain in his side. An hour later, Brown agreed to help Pettit and joined James by the bate pit.

Later, the two slaves were again working, when Pettit heard a loud noise, and upon investigating, found James and Brown fighting with dung forks. James poked Brown, warning that he “would run him through” if he did not stay out of his way, according to witness statements taken during the coroner’s inquest into the murder.

Both men were very angry, but the forks were taken away and things seemed to calm down.

The two eventually retired to the basement kitchen when another commotion erupted. Workers rushed to the scene to discover that James had wrestled Brown to the floor. Brown “cried out he would not fight because of the pain in his side,” according to the inquest. The men pulled James off Brown, but as soon as he was freed, Brown attacked James again only to wind up pinned to the floor a second time. The two were separated again. Brown waited for James to turn his back when he grabbed a heavy iron trammel from the fireplace, and swung it.

The blow crushed the side of James’s skull, and he crumpled to the floor. As witnesses grabbed Brown, James drew his last breath.

An inquisition was led by Nathan Price, one of Hunterdon County’s coroners, on Oct. 15 at Case’s home. Among the “good and lawful men” participating in the inquiry were: Philip Case, Mr. J. Pettit, John Barton, Jacob Matteson and Jacob Werts. After hearing testimony, the inquiry concluded that Brown, indeed, “inflicted the wound willfully, maliciously and with the intention to take away the life of . . . James.”

* The process from turning animal hides into leather was discussed in part 1 of this blog post. Check it out for information on “drawing out dung.” 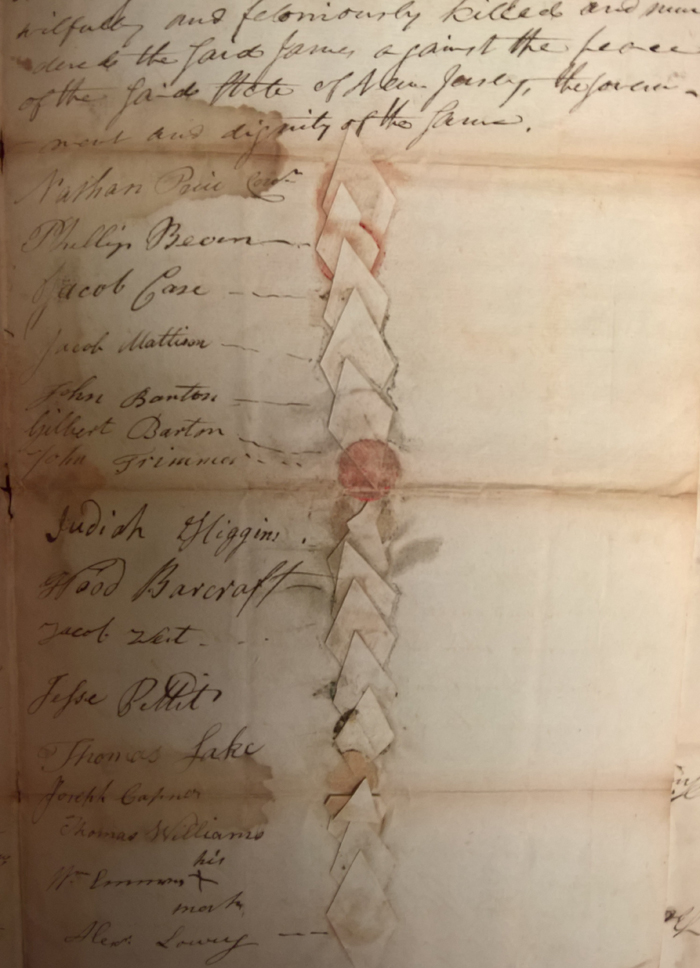