Partially hidden beneath the fallen branches, dried leaves and detritus near the Walnut Brook that courses through the Dvoor Farm lies a gold mine of information about the land’s history in the mid 1800s.

Or, for the sake of accuracy, a copper mine’s worth.

A smattering of clues crops up offering an interesting glimpse of Hunterdon County’s mining industry past that stretches beyond a street name. The fact that this evidence still exists astounds retired geologist Mark Zdepski, who has studied copper mining in the county for more than 20 years.

“This is amazing because it’s untouched,” Zdepski said. “Somebody could have come in here with heavy equipment and taken it all out and used it as fill or something, but they didn’t; they left it here — just waiting to be interpreted.” Courtesy of the collections of the Hunterdon County Historical Society.

Copper mining in Hunterdon County dates to pre-Revolutionary times. Efforts then and during the 1820s-1830s met with little success. Mining fever cooled here until around 1846 when workers for Hugh Capner — who owned a home next door to the Case-Dvoor farmstead — began digging a new cellar on his farm and discovered copper ore. Flemington attorney Charles Bartles was instrumental in forming the Flemington Copper Company, and a mining operation was formed east of the Walnut Brook where property now owned by the Dvoor Farm and St. Magdalen Roman Catholic Church meet. This was the largest of several mines in the Flemington area.

A number of mining companies were formed in the ensuing years. Some were out to make a quick buck via stock jobbing; others were serious attempts to draw copper ore from the earth. In the end, mining resulted in a litter of failed companies and a riot in 1861 by miners. Some investors like James Graham, owner of Graham’s Magazine (which at one time employed Edgar Allan Poe as a critic and editor), lost a fortune. Merchants in town who extended credit to miners lost too. But the bottom line is that there just wasn’t enough copper beneath the surface. Hubert Schmidt in Rural Hunterdon notes: “It is doubted that ore was ever obtained on a profitable basis; stock manipulation was more important to the various promoters than was actual mining, and many persons lost their money as a result of it.”

Maps and reports of the site found in the archives of the Hunterdon County Historical Society indicate a number of shafts. Above, a number of buildings could be found including an engine house, a gigging house, a blacksmith’s shop, laboratory, miners’ houses and an office.

More than 150 years after the last Irish or English miner struck a pick into the earth, Zdepski stops along the shoulder of Mine Street near Shields Avenue, bending down to examine a black rock. “This is slag here,” Zdepski said. “They probably tried to do ore reduction and over here is some anthracite coal. You can see the gas vesicles in here so this has been melted. This is probably from the blacksmith’s shop.”

Rounding the corner onto Shields Avenue, he halts at a 5 1/2-feet-X-4-feet hunk of concrete jutting out from a slope alongside the roadway. “We have a picture (from the 1930s) of truck dumping concrete into a void back when Shields Avenue was being widened,” Zdepski said. This opening doesn’t appear in any of the 19th century mining maps suggesting this was an earlier shaft from the Revolutionary period.

A hill in the woods, likely a muck pile

We tramp into the woods around trees, over branches, through tangles of sticker bushes. We stop at the remnants of the Hunt shaft, one of several that stretched across the land. Behind that a hill rises. “That’s the muck pile; muck being the term for rock blasted out of the underground and hauled to the surface. Any time you have rock that’s broken up, that’s the muck.”

While standing atop a muck pile, Zdepski discusses how one could determine the size of the underground headings — the horizontal passageways in the mine — largely through the use of detailed contour maps and by calculating the cubic yards of excavated material.

Zdepski notes that the diligent observer can also find evidence of coal combustion residue from the steam engine used while mining for copper ore. Evidence of copper staining is present too. Flat rectangular surfaces also provide possible hints of where the crushing and jigging house and engine house would have been located.

A diligent eye can, indeed, get a sense of the copper mining industry that existed on the outskirts of Flemington in the mid-1800s. 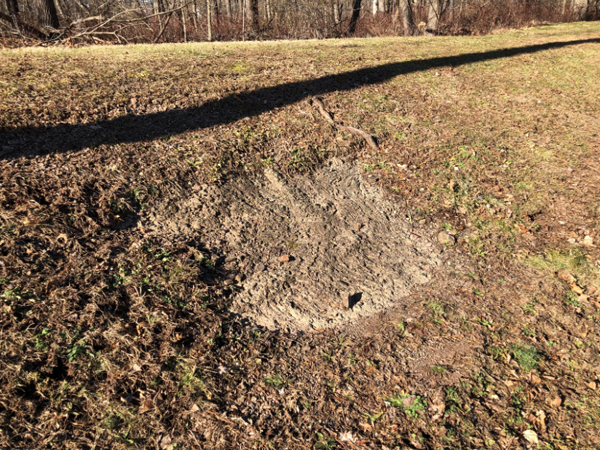 In the meantime, additional clues about Hunterdon’s mining industry lurk beneath the soil. Zdepski said that with some clean up work and experimental test pitting, more could be learned about the history that happened here.

Standing alongside the Walnut Brook, looking around, Zdepski ruminates, “There’s a lot to see here — and a lot to understand.”