Crystal Springs in Lebanon Township offers hikers 291 acres of meadows, mature woodlands, ponds teeming with aquatic life and a network of trails that beckons with the wonders of nature. While one can simply visit and enjoy its tranquil surroundings and its wildlife, the land also has a past. It’s a tale about the family that shaped the land decades before its preservation. We’d like to share that story with you.

The bulk of the preserve was created from a 325-acre tract that Adam Roth named Crystal Springs Farm after he and his children discovered natural springs on the property. These types of springs are known as chalybeate for their high iron content. Hunterdon County notes in its map guide on the preserve: ” In 1815, officials declared chalybeate springs to be the purest source of water. This led to the creation of one of the earliest resort and spa communities in the country, which was located on nearby Schooley’s Mountain in Washington Township.”

Roth was born in Bavaria, Germany and received a Doctorate degree in Engineering from the University of Leipzig. He became an aeronautical engineer, and while working in Detroit, made modifications to the automotive piston engine for which he received a patent, according to The Heritage of Our Hunterdon County Parks by Douglas Kiovsky. Roth would go on to hold a number of patents during his career, including one for hydraulic landing gear used by Corsair airplanes during World War II.

Roth moved to New Jersey, where he met his wife, Germaine. They discovered a shared love for flying airplanes. Along with several partners, Roth opened a machine shop that built components for military aircraft. With World War II underway, the business took off. When the war ended, the company focused on “the production of hydraulic pistons for the rotor heads of helicopters,” Kivosky’s book notes. Sikorsky and Boeing became its two largest clients.

Roth sought a country retreat for his family, purchasing a pair of farms by the border Hunterdon and Morris counties in 1944. “The main farm was a complex of four houses, chicken houses, hog pens and a log cabin . . . with a unique waterwheel that supplied its water,” Kivosky notes. The Roths also excavated seven man-made ponds from the springs for fishing and to create an extensive irrigation system.

Roth also designed a dairy barn, which would house a number of prize-winning cows, including Marian, a Holstein, which a 1954 Plainfield Courier-News article notes, produced 2,405 pounds of milk and 89 pounds of butterfat. All told, the farm had a milking herd of 125 dairy cows, along with horses, sheep, pigs, chickens and ducks. Apple and pear trees abounded on the land. 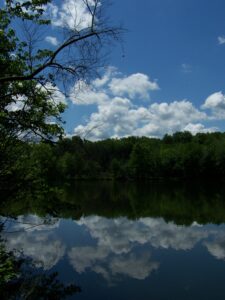 Adam Roth died Sept. 13, 1976. Germaine, who owned three of the four parcels that comprise what is now Crystal Springs, sold the property to members of the Pelio family. In 2004, the Pelios sold the farm to a group that included the New Jersey Water Authority, Hunterdon County and Hunterdon Land Trust. Today, the county manages the preserve.

Today, the park is available for all to enjoy. One may not need to know the story of those who walked these lands before to appreciate the sight of bobolinks and eastern meadowlarks soaring overhead, or to stumble serendipitously upon a turtle sunning on a log. Still, what others did in the past contributed to that wonderous natural moment that we can all enjoy today.

Visit here to download a trail guide and see a map of the preserve.

Looking for a different Treasure Hunterdon Adventure? Check these places out!