Host Your Next Event at Our Wagon House

For information about renting the wagon house and to schedule an appointment to see it, contact Catherine Suttle at 908-237-4582 or catherine@hunterdonlandtrust.org.

Learn more about the Wagon House 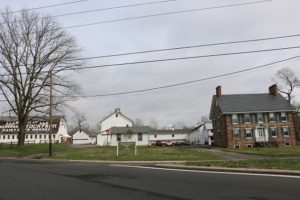 The historic Dvoor Farm is the Hunterdon Land Trust’s home and the location of its popular farmers’ market. Listed on the State and National Registers of Historic Places, the 40-acre site has a cluster of 19th- and early 20th-century barns and a 1798 stone farmhouse that now houses the Land Trust’s offices.

A field in front of the iconic horse barn is the setting of our Farmers’ Market, which attracts about a thousand people every Sunday from May to November. A winter market is held December to mid-May on the first and third Sundays of the month in our wagon house. The market has between 15 and 20 vendors, all of whom grow or make their own agricultural products.

Walnut Brook flows through the property and separates the farm buildings from a 20-acre field that’s a native grass meadow. A trailhead is a concrete bridge that cows once crossed to graze in the fields. The trail leads alongside the Walnut Brook and from there hikers can either head into Mine Brook Park, the Bernadette Morales Nature Preserve and the Uplands Reserve (please note: the park, preserve and reserve are not HLT-owned. Please check township and county websites for more information on whether these sites are open during the Covid-19 pandemmic.) or swing along in a loop to a nearby stand of old-growth trees and back to the farm complex. The brook itself underwent a major restoration project in 2010-11, which transformed a badly eroded and flood-prone area into a wetlands that mitigates downstream flooding, enhances aquifer recharge and sustains a rich growth of native plants.

The Dvoor Farm was originally part of a huge tract owned by William Penn, who in addition to being the founder of Pennsylvania had extensive holdings throughout the Delaware Valley. Penn passed the land on to his sons, who, in the age-old tradition of real estate development, promptly divided it into parcels and sold it off. One such parcel was sold to a German immigrant named Johann Philip Kaes (later anglicized to John Case) in 1738. The property stayed in the Case family for more than a century, changing hands multiple times until it was purchased by Jacob Dvoor in 1920. The homestead was eventually conveyed to Jacob’s son, Herbert, who continued the family business in dairy cows well into the 1990s.

For many years, the Citizens for Parkland spearheaded efforts to preserve the farm. In 1999, to preserve the Dvoor farm, Herb Dvoor sold the tract to the South Branch Watershed Association, which, in turn, conveyed it to the Hunterdon Land Trust.