Time in a Bottle: A Story
About a Dvoor Farm Artifact

“Things men have made with wakened hands, and put soft life into
Are awake through years with transferred touch, and go on glowing
for long years.
And for this reason, some old things are lovely,
Warm still with the life of forgotten men who made them.”
— D.H. Lawrence

The things men have made offer tantalizing glimpses of our past. Here at the Dvoor Farm, we have a number of found artifacts that remind us of days gone by.

For instance, consider the rectangular amber bottle decorating the mantle of one of the upstairs fireplaces in the historic stone Dvoor Farmhouse. It stands 9-inches tall, can hold 18 ounces, and in raised letters reads “Dr. J. Hostetter’s Stomach Bitters.” Not one of our staff members can recall with certainty how it got here, but the general suspicion is the bottle was found in the house or on the grounds.

Of course, we have no idea who at the farm once favored Dr. Hostetter’s Stomach Bitters. Still, it was interesting to run a quick online search and learn about a product whose popularity soared in the mid- to late-1800s. 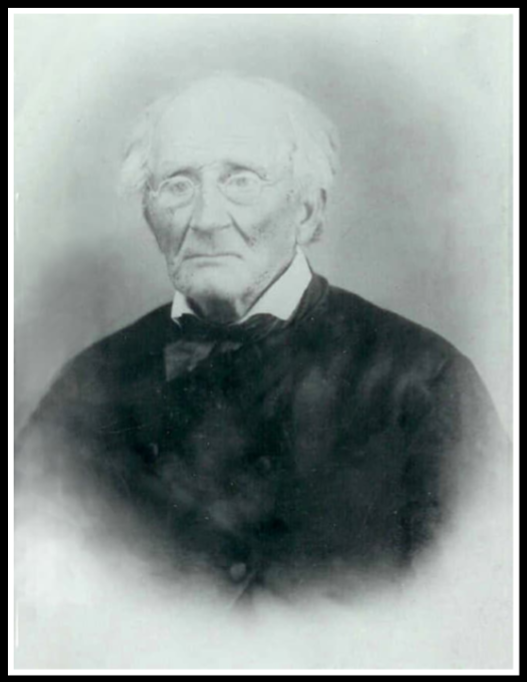 Dr. Jacob Hostetter developed his formula for stomach bitters around 1850. Jacob’s son, David, after the entire stock of his dried goods business was destroyed in the catastrophic San Francisco Fire of 1851, moved to Pittsburgh and with a partner, George Smith, began mass producing his father’s “elixir” in 1853. The bitters contained small amounts of chincona bark, quinine, colombo and gentian root, but it’s main ingredients were water and alcohol. In fact, the formula consisted of 47% alcohol, and advertising touted the product’s success “chiefly because it contained more alcohol than any other nostrum.”

It was so potent you could purchase shots of it in some bars. Bottlebooks.com says many bitters were alcohol disguised as medicine. The practice of adding a small amount of herbal bitters to gin so it could be sold without taxation under the guise of medicinal liquor likely originated in England before jumping across the pond and taking off in the United States at the time Hostetter was first setting up shop.

Sales of bitters blossomed during the Civil War. Northern patent medicine manufacturers turned a quick profit supplying all kinds of remedies to Union troops, preying on their fears of cholera, yellow fever and dysentery. A heavy dose of newspaper advertisements directed toward army consumption claimed the bitters provided “a positive protection against the fatal maladies of the Southern swamps, and the poisonous tendency of the impure rivers and bayous.” The Hostetter marketing campaign proved so successful that the War Department began purchasing Hostetter’s Stomach Bitters for the Union Army by the boxcar. At war’s end, more than 6,000 bottles a day were being sold in the United States and abroad.

Sadly, the distribution of bitters like Dr. Hostetter’s had devastating consequences. Veterans returned home addicted to bitters which they thought had prevented them from falling ill during the war.

Bitters manufacturers employed a variety of advertising gimmicks to promote their product, offering everything from trade cards, signs, trays, tokens, stamps, clocks and decanters. Hostetter’s printed a very popular almanac that entertained the public and while promoting its product.

For example, almanac readers would have come across the following in 1867: 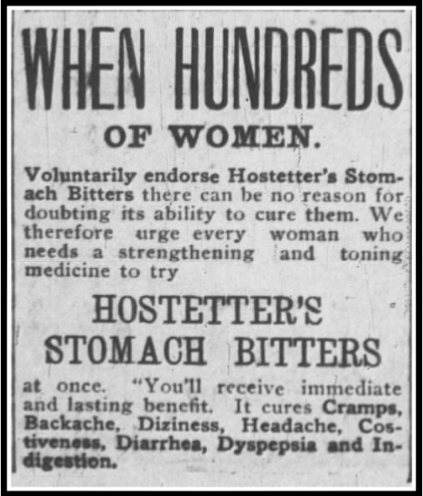 Dyspepsia’s pangs, that rack and grind
The body, and depress the mind;
Slow constitutional decay,
That brings death nearer, day by day;
Nervous prostration, mental gloom,
Agues, that, as they go and come,
Make life a constant martyrdom;
Colics and dysenteric pains,
‘Neath which the strong man’s vigor wanes;
Bilious complaints, — those tedious ills,
Ne’er conquered yet by drastic pills;
Dread Diarrhea, that cannot be
Cured by destructive Mercury;
Heralds of madness or the tomb;
For these, though Mineral nostrums fail,
Means of relief at last we hail,
HOSTETTER’S BITTERS medicine sure,
Not to prevent, alone, but cure.

The almanac was later being printed in seventeen languages with an annual circulation of fifteen million copies.

Hostetter’s bitters business continued to prosper through the early 1900s under the continued guidance of Hostetter family members. More than half a million bottles were still being sold in 1920 alone. The company continued to sell its bitters into the late 1950’s and was known simply as Hostetter’s Tonic.

To give you a sense of how these bitters were made, we found one replica of Hostetter’s bitters. Of course, the recipe changed many times over its existence:

Mash together the gentian, orange peel, cinnamon, anise, coriander, cardamom and Peruvian bark. Mix the crushed ingredients with the gum kino and the alcohol. Let the mixture sit in a closed container for two weeks, shaking occasionally. Strain the mixture, add the sugar and water to the strained liquid and serve.

(Sign up for our newsletter for information on upcoming Dvoor Farmhouse tours and stories on our historic past.)